Can You See Orion?

You can adjust the darkness of the sky by moving the top slider back and forth. Move it to the right (towards the tent) to see Orion in a dark sky, the way it might look if you were out camping far away from any lights. Move the slider to the left (towards the streetlight) to see how Orion might look from a city where there are many lights around. "Magnitude" is a term astronomers use to describe how bright stars are. Stars with a magnitude that is low, like 1 or 2, are quite bright. Stars with higher number magnitudes, like 4 or 5, are dimmer. The dimmest stars that most people can see with their naked eye are around magnitude 6. The slider shows the "magnitude limit" of the dimmest stars you could see with different amounts ambient light.

The bottom slider, on top of the spinning globe, lets you change where you are on Earth. Move it up and down to see how Orion might look from different latitudes.

If you can't see the animation below, or it doesn't seem to be working right, you may need to get the latest Flash player plugin for your computer.

Light pollution is the unwanted illumination of the night sky created by human activity. Light pollution is a broad term that refers to multiple problems, all of which are caused by inefficient, annoying,...more 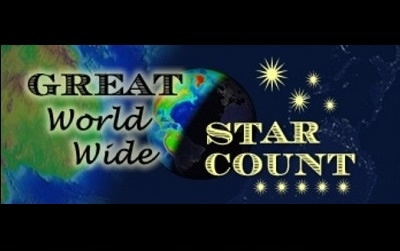