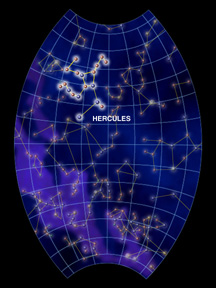 The Constellation Hercules, the great warrior
Click on image for full size

Hercules, the great Greek warrior, can be seen kneeling in the sky for northern latitudes throughout the Spring months. Hercules first becomes visible in the east in April, and works his way high across the night sky through October. From the southern hemisphere, he appears low in the north. Four of Hercules' brighter stars form what is commonly known as the Keystone. Hercules' arms and legs extend from this central square.

By far the most exciting object to see in Hercules is the magnificent globular cluster M13, which is visible in dark night skies even without binoculars or a telescope. With the naked eye, this cluster of more than 300,000 stars appears as a faint fuzzy spot between the stars which form the western side of the Keystone.

Many other constellations were unfortunate victims of Hercules, and thus were also placed in the sky. According to the legends surrounding Hercules, he slew Leo, the Lion, Draco, the Dragon, and Hydra, a Serpent with nine heads, as part of his Twelve Labors. Cancer, the Crab was sent by Hera to annoy Hercules in his battles, and became yet another victim of the hero.

Cancer, the Crab, is a member of the Zodiac, a group of constellations that the Sun travels through each year. Cancer spends half of the year in the sky. It first rises in December and is visible through...more

According to the Greek mythology, a particular group of stars represents the figure of the most famous Greek hero, Heracles. Heracles was a muscular man endowed with extraordinary courage and physical...more

According to the Greek mythology, a particular group of stars represents the figure of the most famous Greek hero, Heracles. Heracles was a muscular man endowed with extraordinary courage and physical...more