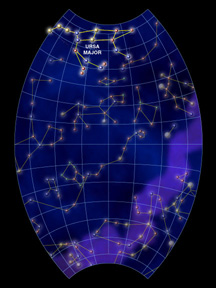 Ursa Major is probably the most famous constellation, with the exception of Orion. Also known as the Great Bear, it has a companion called Ursa Minor, or Little Bear. Everyone living in the Northern Hemisphere has probably spotted the easily recognized portion of this huge constellation. The body and tail of the bear make up what is known as the Big Dipper. Also called names such as the Plough, the Wain and even the Wagon, this constellation has a lot of history behind it.

An interesting characteristic of the constellation is its long tail. Bears usually have very short tails, so stories were created to account for this peculiarity. The Greeks said that Zeus threw the bears into the sky by swinging them from their tails, thus stretching them out. Some Native American tribes believed the long tail consisted of three hunters chasing after their prey.

The history behind this family of stars is not the only thing that's special. The constellation itself has many unique characteristics. Two of the stars, Dubhe and Merak, are pointer stars. If you are looking at the Big Dipper, the outer edge stars that make up the "bowl" of the dipper are the two stars, with Merak being the one on top. Connect a line between the two, and extend it north a distance about five times the distance between them. It will connect with the North Star, Polaris.