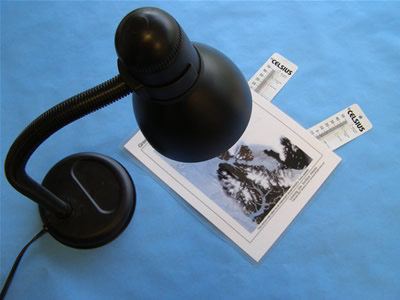 The amount of energy retained by the Earth is strongly dependent on the albedo of Earth surfaces. Scientists use the term albedo to define the percentage of solar energy reflected back by a surface. Forests, grasslands, ocean surfaces, ice caps, deserts, and cities all absorb, reflect, and radiate solar energy differently. Light colored ice and snow are very weakly absorptive, reflecting 80-90% of incoming solar energy. Dark-colored land surfaces, are strongly absorptive, reflecting only 10-20% of the incoming solar energy, and contributing to significant heating of the Earth's surface and lower atmosphere.

Understanding local, regional, and global albedo is critical to predicting global climate change. As global temperatures increase and snow and ice cover shrink, the exposed darker surfaces underneath absorb more solar radiation, causing further warming. This is called ice-albedo feedback. The magnitude of the effect is a subject of current scientific research.

How Much Ice Is Melting?

In most areas of the world, the ice of the cryosphere melting. Between 1961 and 1998 mountain glaciers lost an average of 7 meters of ice thickness and glaciers in mountainous areas near the equator have been particularly hard-hit. According to global climate models, all of the glaciers in Glacier National Park in Montana will be gone by the year 2030. Larger glaciers and the ice sheet that caps Greenland are also melting as the Arctic warms rapidly. Snow and ice cover near the North Pole is currently decreasing at approximately 0.4% per year. Arctic sea ice has been decreasing at about 2.9% per decade. And in the South Polar Region, seven ice shelves, most in Antarctica have retreated by a total of approximately 13,500 square kilometers.

Bhutan Land and Glacier: A satellite image taken by the ASTER instrument aboard NASA's Terra satellite, this picture shows retreating mountain glaciers in the Himalayan mountains of Bhutan. The glaciers have been melting over the past few decades, and lakes have formed on the surfaces and near the termini of many of the glaciers. Some of the glaciers are white as the ice is covered with snow pack. Other parts are rocky and have the same color as the surrounding land.

Sea Ice and Ocean: This image, from the MODIS instrument on the Terra satellite, shows Antarctica's ice-covered Ross Island (lower left), Ross Ice Shelf, sea ice, and the Southern Ocean (upper right). Only the outer edge of an ice shelf floats in the ocean water; most of it is suspended over the water because it is connected to the ice sheet on land. Sea ice, on the other hand, floats in the water and is made of frozen ocean water. Sea ice and ice shelves are both very light in color and, thus, reflect most energy.

Greenland Land and Glacier: This image of Petermann Glacier in northwestern Greenland was taken on July 5, 2003 with the MODIS instrument on NASAs Terra satellite. During summer, turquoise blue pools of melt water form on the glacier surface and snow melt at low elevations allows a some rocky land to be exposed. Scientists have observed widespread thinning around the edges of Greenland's ice since at least the late 1990s.