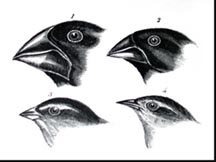 Darwin believed that the process of evolution took too long for us to observe it happening. But the finches of the Galapagos were an example of evolution taking place and he wrote about them in his book called “The Voyage of the Beagle”. Darwin decided that these finches all used to have bills like other finches, but when they came to live on the Galapagos and started eating different things, their beaks changed over thousands of years. This is called divergent evolution. Since he described the finches, a number of researchers, including Peter and Rosemary Grant (who wrote “The Beak of the Finch”) have traveled to the Galapagos Islands to conduct more detailed research.

Many of the finches in the Galapagos are not yet distinct species because they are still able to reproduce. However, as they are separated onto different islands, physical barriers prevent groups from reproducing. Different species may develop when a population is divided and then the groups evolve in separate ways. This is called allopatric speciation. If the two parts of the population evolve in different ways and then are able to come pack together (if the geographic barrier is removed), the two populations may compete with each other. Or, they may have developed specializations that allow them to no longer need the same food type or nesting space, so they may be able to live in the same space without competition.