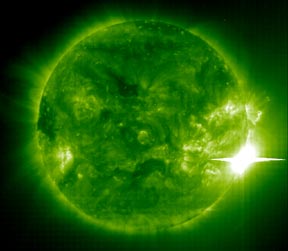 This ultraviolet image of the Sun shows one of the largest solar flares ever seen. The flare, which erupted in November 2003, is the bright region along the Sun's right limb. The horizontal "spikes" extending to the right and left of the flare are not real; they are an artifact produced by the imaging instrument, which was overloaded by the intense brightness of this flare.
Click on image for full size
Image courtesy SOHO (NASA & ESA).

Movie: Journey Beneath a Sunspot

When Nature Strikes: You Be the Solar Scientist! Classroom Activity

Solar flares are essentially huge explosions on the Sun. Flares occur when intense magnetic fields on the Sun become too tangled. Like a rubber band that snaps when it is twisted too far, the tangled magnetic fields release energy when they "snap". Solar flares emit huge bursts of electromagnetic radiation, including X-rays, ultraviolet radiation, visible light, and radio waves. The energy emitted by a solar flare is more than a million times greater than the energy from a volcanic explosion on Earth!

Although solar flares can be visible in white light, they are often more readily noticed via their bright X-ray and ultraviolet emissions. Coronal mass ejections often accompany solar flares, though scientists are still trying to determine exactly how the two phenomena are related. Solar flares burst forth from the intense magnetic fields in the vicinity of active regions on the Sun. Solar flares are most common during times of peak solar activity, the "solar max" years of the sunspot cycle.

Active Regions on the Sun

An active region on the Sun is an area with an especially strong magnetic field. Sunspots frequently form in active regions. Active regions appear bright in X-ray and ultraviolet images. Solar activity,...more