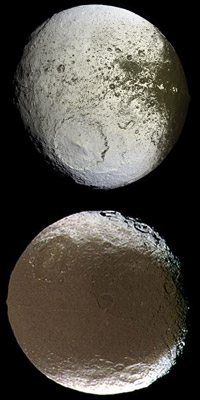 Two views of the strange surface of Iapetus. Some parts of the moon's surface are bright white, while other regions are very dark. These images were captured by the Cassini spacecraft.
Click on image for full size
Images courtesy of NASA/JPL/Space Science Institute.

The Surface of Iapetus

The surface of Iapetus is very unique. No other moon has its half-black and half-white appearance. It appears to be resurfaced on the dark side with a dark and smooth substance, and on its bright side appears to be heavily cratered. The process which caused this strange darkening is unknown.
Last modified October 8, 2009 by Randy Russell.