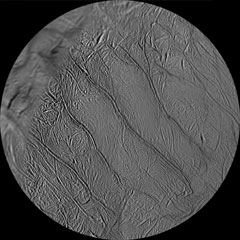 This map shows the South Pole of Enceladus. Enceladus is a moon of Saturn. Can you see the huge "tiger stripe" cracks in this view? They go from upper left to lower right across the map.
Click on image for full size
Image courtesy of DLR and NASA/JPL/Cassini Imaging Team.

Enceladus is an icy moon of Saturn. The South Pole of Enceladus is one of the strangest places in the Solar System.

There are several huge cracks in the surface of Enceladus near its South Pole. The cracks are more than 100 km (62 miles) long. These giant cracks have been nicknamed "tiger stripes". Strangely, the South Pole of Enceladus is the warmest place on the moon. The areas near the tiger stripes are warmest of all. What is going on there?

Scientists think there might be underground lakes or seas of liquid water. Something is heating the area near the South Pole, keeping the water from freezing. Some of the water makes it to the surface of the moon through cracks. When it does, it erupts from geysers as ice crystals!

The ice from the geysers is thrown hundreds of kilometers above the surface of Enceladus. Some ice crystals leave the moon and go into orbit around Saturn. The ice makes up part of one of Saturn's rings! Some ice falls back onto Enceladus. This makes the moon very bright and shiny, as if it were covered with fresh snow.

There's a lot of strange stuff going on at both the North and South Poles of Saturn. Two of Saturn's moons also have interesting polar regions. Let's take a look! The atmosphere and clouds are quite odd...more