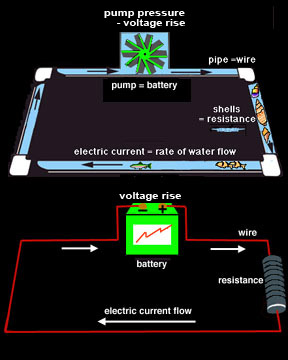 An electric current is a flow of electrons through a conductor (like a copper wire). Since we can't see electrons, it would be nice to have a model or an analogy of electric circuits to help us understand circuits better. Water flowing through pipes is pretty good mechanical system that is a lot like an electrical circuit.

This mechanical system consists of a pump pushing water through a closed pipe. Imagine that the electrical current is similar to the water flowing through the pipe. The following parts of the two systems are related:

Sometimes a whole electric power system shuts down. This can happen after a strong space weather storm. It is hard to get the whole system running again after it has been shut down all the way. The main...more

Eccentricity of an Orbit