Constellations are formed of bright stars which appear close to each other on the sky, but are really far apart in space. The shapes you see all depend on your point of view. Many societies saw patterns among the stars with gods and goddesses or stories from their culture. Most of the constellations with which we are familiar come from ancient Greece. But other civilizations created their own patterns in the sky based on stories and people that were important to them. The stories below provide an overview of myths associated with the constellations identified by early civilizations around the world. 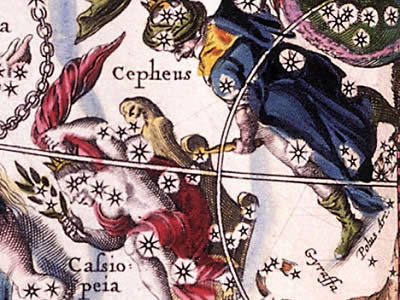 In Navajo myth, Ursa Major, the Great Bear, originated from the story of the Changing Bear ...Read more

Lakota: Constellation of the Hand

According to the Lakota, the Constellation of the Hand, namely the bottom half of Orion, represents ...Read more

According to the epic Mahabharata, composed after the Rig Veda in about 500 B.C., the stars ...Read more

Draco the dragon is famous throughout mythology. This great beast was especially present in ...Read more

According to the Greek mythology, a particular group of stars represents the figure of the ...Read more

More than two thousand years ago, Greeks believed the god Zeus placed the figure of a gigantic ...Read more

A long time ago, Greek people believed that a long strip of Zeus was really an image of a gigantic ...Read more

According to an ancient Greek legend, the figure of a gigantic crab was placed in the nighttime ...Read more

The ancient Greeks saw the figure of the Greek myth, Orion, in the nighttime sky. There are ...Read more

More about Myths about Constellations

Did you know that the Arctic is warming?

The economic growth across much of Asia comes with a side effect: pollutants from the region are wafting up to the stratosphere during monsoon season. The new finding, in a study led by scientists at the...Read more