Why does the temperature of the atmosphere vary? 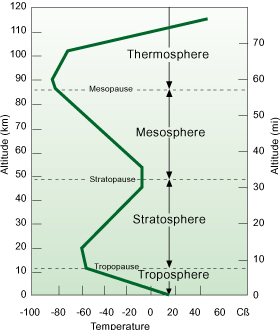 Most people know that it is colder on top of a mountain compared to the ground, but few actually know why. And even less know that the atmosphere actually warms up again! The true temperature profile of the atmosphere is shown in the image.

The air at the surface up to around 10 kilometers is called the troposphere. The reason it is warmer at the surface is simple. The air is warmed by heat given off by the Earth! The farther away from the surface the air moves, the less heat there is to absorb.

From 10 to 20 kilometers the atmosphere is stable. This region is called the tropopause. From 20 to about 50 kilometers is the stratosphere. In this region the air actually warms with height! Ozone is concentrated in this part of the atmosphere and it absorbs ultraviolet light from the Sun. More light is absorbed at higher altitudes compared to the lower stratosphere, so the temperature increases.

Finally, the mesopause divides the mesosphere from the thermosphere, which is the section of the atmosphere higher than 90 km. In this region, the temperature increases again! This time, it is molecular oxygen (O2) that causes the temperature increase. The oxygen absorbs light from the Sun, and since there is very little air in the thermosphere, just a little absorption can go a long way!