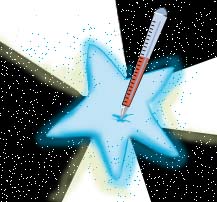 Temperature has a lower limit, but not an upper one...at least in theory. In the mid-1800s, Lord Kelvin created an absolute temperature scale whereas the lowest temperature possible is 0 K. Kelvin's lower limit seems to be withstanding the test of time. Not a single scientist nor anything in nature has been able to reach a temperature of 0 K or less. As for an upper limit, scientists are not willing to make a guess until more about the universe is known.

Since stars are so far away, it's obvious that we can't just go and stick a huge thermometer in them. So astronomers analyze the light that a star produces. They do this through something called "spectroscopy" (spec-tra-scoh-pee). Spectroscopy is a method that separates a star's light into a bar of several different colors. Some of the colors are thick and some are thin. The colors will look differently depending on what the star is made of.

Once the astronomer figures out what the stars consist of, he/she can determine how hot the core is. If the star has more of a certain gas than another, then the star will be hotter or colder depending on what that gas is. The temperature at the core is also dependent on how dense the star is. If the gases don't have a lot of space to move around, the star will get hotter.

It's kind of like being in a room full of people. Did you ever notice that it seems a lot warmer in a room with a bunch of people than if you were just in that same room alone? Well, the atoms and molecules in a star's core are just like that. When they are all squeezed together really tight they get antsy and start bumping into each other. This makes the core really hot.