Some scientists say that an asteroid is going to hit the earth 30 years from now. Is this true? Can we protect ourselves by sending nuclear weapons into space to destroy the asteroid? How big does a comet/asteroid have to be in order to destroy the Earth? What's the biggest a comet/asteroid could be and still burn up in our atmosphere? 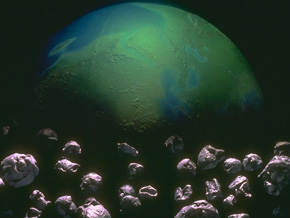 Movies such as Deep Impact and Armageddon seem to have triggered questions from all over the world!

Right now, we have the technology to divert a comet or asteroid coming towards the Earth. Our rockets and explosives would break apart even a large object of about 1 kilometer in diameter. We would of course need some lead time (10 years would be a nice minimum notice). If we were to discover an object coming towards the Earth with only 1-2 years notice before impact, our technologies might not be adequate. The best we could hope to do would be to evacuate the impact site. So the best plan right now is to continue searching for Near Earth Objects so that we will know where these asteroids and comets are.

It is believed that an object in the 100 meter to 500 meter range could penetrate the Earth's atmosphere. These objects would cause local damage near the impact site. Larger bodies would certainly penetrate the atmosphere and would cause global devastation. The only thing we can compare such an impact to is that of nuclear war. Fortunately, impacts by such large bodies are extremely rare.

Not long ago, many people thought that comets were a sign that something bad was about to happen to them. People didn't understand how objects in the sky moved, so the sight of a comet must have been...more

Asteroids are small bodies that are believed to be left over from the beginning of the solar system 4.6 billion years ago. They are rocky objects with round or irregular shapes up to several hundred km...more