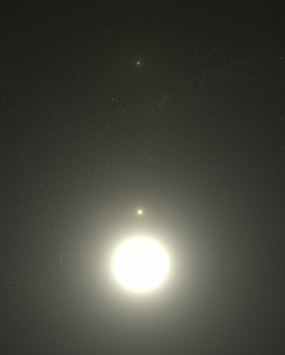 This is an artist's depiction of Polaris in the constellation Ursa Minor.
Click on image for full size
NASA, ESA, G. Bacon (STScI)

Scientists using a new telescope found the size of the North Star, also known as Polaris. It turns out that Polaris is 46 times larger than the Sun. It is no surprise to scientists, because Polaris is a cepheid star.

Cepheids are special stars that pulsate at a constant interval in time. In other words, cepheids get brighter for a short time because there size changes. The complex make-up of the stars creates this effect. Cepheids are known to be much larger than normal stars like the Sun.

Polaris is one of the most famous stars in our night sky. The North Star is almost directly above the Earth's North Pole, so the position of the star changes only slightly during the year. Sailors used Polaris to guide them on the open seas. Today we know Polaris as the last star in the constellation Ursa Minor, or the Little Bear.