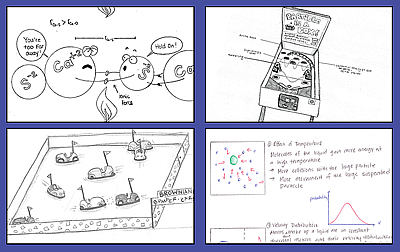 Could you explain chemical processes like photodissociation with a drawing? How about bonding in molecules or quantum physics? Thats what students at several colleges have been doing.

They are not just doodling in their notebooks. Their drawings are part of Picturing to Learn, a project funded by the National Science Foundation. And their artwork is helping high school students learn science concepts through pictures.

To draw pictures that explain scientific concepts and processes, they have to really understand the science. It takes a different kind of thought process. Larger concepts are broken down into smaller, more manageable pieces. All this helps them better understand how the science works as they make the pictures. This projects artists are college students taking physics, biology, and chemistry classes at Harvard University, the Massachusetts Institute of Technology, Duke University, Roxbury Community College, and the School of Visual Arts in New York City.

"Visually explaining concepts can be a powerful learning tool," says Felice Frankel, one of the projects leads at Harvard University. "The other important part of this is that the teacher immediately identifies student misconceptions."

Many of the drawings bring scientific concepts to life in interesting new ways. Students are encouraged to be creative and to consider a variety of formats, including cartoons and stick figures. Workshops are also getting science and art students working together to take their pictures of scientific phenomena to the next level.

Photons are tiny bits of light and other kinds of electromagnetic radiation. Photons can sometimes break apart molecules. When this happens, it is called photodissociation. When a photon runs into a molecule,...more

Atoms and the tiny particles from which they are made strongly influence the world around us. The fields of atomic physics and particle physics help us understand the life cycles of stars, the forms of...more