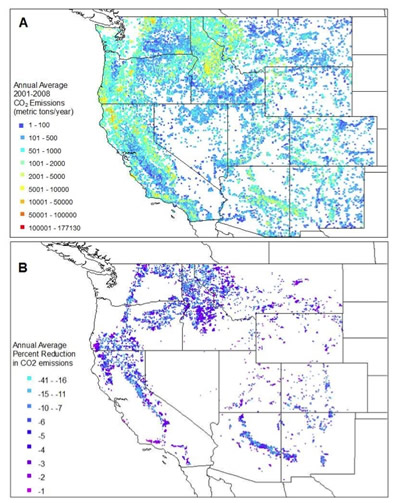 Carbon emissions for western states were reduced by millions of metric tons annually.
Click on image for full size
Image Courtesy of NCAR

"It appears that prescribed burns can be an important piece of a climate change strategy," says Christine Wiedinmyer, a scientist at the National Center for Atmospheric Research (NCAR) in Boulder, Colorado., and lead author of the new study. "If we reintroduce fires into our ecosystems, we may be able to protect larger trees and significantly reduce the amount of carbon released into the atmosphere by major wildfires."

Wildfires often consume large trees that store significant amounts of carbon. Prescribed fires are designed to burn underbrush and small trees, which store less carbon. By clearing out the underbrush, these controlled burns make it less likely that large wildfires will occur in the same area.

Forests are seen as important factors in climate change. Trees store significant amounts of carbon, which helps offset the large amounts of carbon dioxide emitted by factories, motor vehicles and other sources. When trees burn down or die, much of that carbon is returned to the atmosphere. It can take decades for new forest growth to store the same amount of carbon emitted in a single fire.

In the western United States, for over 100 years land managers have focused on stopping fires. This has led to very dense forests that store large amounts of carbon. But these forests have become overgrown and vulnerable to large fires. Changes in climate, including hotter and drier weather in summer, are expected to spur increasingly large fires in the future.

"While it can be costly to set controlled fires, there is also a cost in leaving forests vulnerable to larger fires," Wiedinmyer says. "More research can help forest managers make better decisions about our forests and climate change."