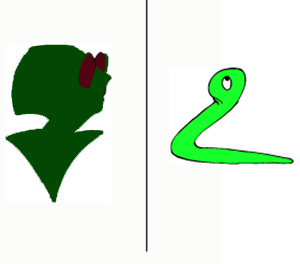 Do aliens look like E.T.(left) or a worm?
Click on image for full size
Courtesy of Nova Corporation

Twenty years after the making, E.T. the extraterrestrial is still entertaining the world. Portrayed as a lovable, happy friend, E.T. stole the hearts of millions over the years. However, to this day scientists have yet to find any evidence of an alien species resembling this cute buddy. Still, scientists believe that other living beings exist in our Universe.

The likelihood of finding a creature like E.T. is very slim. Real aliens are probably very simple, but able to live in harsh environments. Scientists believe that all creatures need basic conditions for survival, including water, food and a temperature close to the Earth's.

Mars and Europa, one of Jupiter's many moons, are the two bodies in our solar system that may be able to support life. Both contain ice, meaning they may also have liquid water.

Scientists think aliens look more like a large worm. I guess they would have trouble trying to "phone home"!