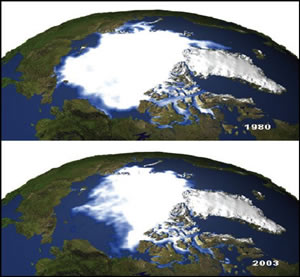 The effects of climate change are not felt with the same intensity in all parts of the world. While Earths average temperature has risen 0.6°C (1.0°F) during the 20th century, some areas of our planet have experienced more warming, and others have experienced less. In the north polar region, the climate has warmed rapidly in the past few decades. Average temperatures in the Arctic are rising twice as fast as they are elsewhere in the world. In Alaska, USA temperatures have increased on average 3.0°C (5.4°F) between 1970 and 2000. The warmer temperatures have caused other changes in the Arctic region. In the opposite hemisphere, the Antarctic Peninsula has also warmed rapidly, five times faster than the global average, while the temperature of the interior of the Antarctic continent has remained stable or has cooled, which may be related to ozone depletion. Since 1945, the Antarctic Peninsula has warmed about 4.5°F (2.5°C). The Southern Ocean is also warming faster than expected.

Why are the polar regions particularly susceptible to global warming? The ice and snow in the polar regions, because of its light color and high albedo, reflect most incoming solar energy back out to space. However, as the addition of greenhouse gases to the atmosphere is warming the planet, some of this ice and snow melts and so less of the incoming solar radiation is reflected back out to space and more of it is absorbed by the Earths surface and oceans. The additional energy warms the polar regions, causes more ice to melt and, consequently more warming occurs. This is known as the ice-albedo feedback.