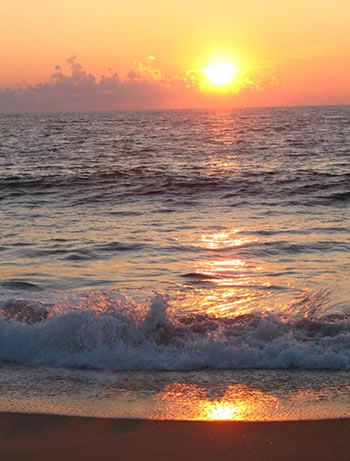 At the ocean surface, water is moved by the wind and Coriolis effect to form large surface ocean currents. These currents swirl water around ocean basins to create large loops of rotating ocean water called gyres. The Gulf Stream, a surface current that runs between the United States and Europe is part of a gyre in the North Atlantic. Often, smaller spinning rings of water called eddies form from surface ocean currents.

Ocean water is moving from deep to shallow areas of the ocean in areas of upwelling. This can have an impact on marine life and the regional climate. An upwelling area can create a cool, damp and foggy environment above the water. It can also drain power from hurricanes if they pass over. The upwelling water is rich in nutrients so plankton blooms are common.

The direction where surface water moves is affected by the direction of the wind and a process called Ekman Transport. Water at the ocean surface, moved by the wind, ends up moving at a right angle to the wind because of this process.

Moving water is found on a smaller scale too. Waves travel across the ocean and crash on coastlines. Currents along coastlines have the power to transport sand to new places and to even move swimmers far from their beach towels.

On a global scale, water moves each day with the tides. It also moves around the world from the shallow to deep oceans because of changes in the density of seawater - a process called thermohaline circulation.

Ocean waves often approach a coastline at an angle. This moves water along the coast in a longshore current. Longshore currents grow stronger when the incoming waves are closer to perpendicular to the...more