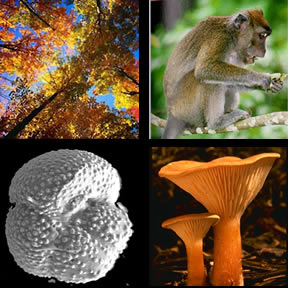 From trees, to mammals, plankton such as forams to mushrooms, Eukaryota domain contains some pretty diverse organisms. You are a member of the Eukaryota domain too! In fact, all plants, animals, protists, and fungi, are members of the domain.

These groups might seem pretty different, and they are, but they all have a few key aspects in common including their biochemistry and eukaryotic cell structure, which is unique to the group. All members of the domain Euraryota have eukaryotic cells. Eukaryota is the only domain whose members have this cell type. Eukaryotic cells contain a special membrane bound organelle called a nucleus that contains genetic material (DNA) within packages called chromosomes.

Geologists have found evidence that sea ice extended to the equator 716.5 million years ago, bringing new precision to a "snowball Earth" event long suspected to have taken place around that time. Funded...more