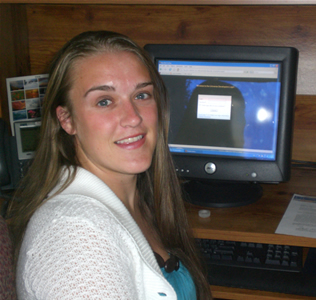 As a senior at the University of North Dakota - majoring in Spanish and Atmospheric Sciences - I had been looking for opportunities were I could combine my two majors and passions.

My fascination for weather goes back as far as I can remember. In fact, - according to a neighbor - I was able to name local meteorologists on television at the age of eighteen months old! My love for Spanish came in high school when I took my first Spanish class.

My advisor at UND led me to the Windows to the Universe project, developed at UCAR/NCAR which combines these passions of mine. I sought out for an opportunity as an Intern the summer of 2008, so I could closely be a part of a project that clearly combines Spanish, Atmospheric Sciences, and Education and Outreach.

I was welcomed by the Windows to the Universe team to join them for 10 weeks during the summer of 2008. During this term I worked with W2U developers on developing pages for a new Natural Hazards section. Another task was creating Word Walls for all the translated activities within the Teacher Resources section.

Community outreach was another ingredient of my internship. Together with the Education and Outreach Coordinator, I worked in a couple of summer programs to the Hispanic community (CDE and Hispanic CREO). While working with these groups, I facilitated science activities with over a 100 kids ranging from ages 6 to 15 helping their understanding of science along with practicing my Spanish. I also was able to come to meet several of Denvers Hispanic leaders. These outreach opportunities were an incredible chance for me to see that I can actually combine my two passions and be of great impact and service!

In my free time, I love to speak Spanish, watch sports -especially hockey-, baseball, and softball. I also enjoy playing sports or being outside, to cook/bake, and helping out in anyway I can. One day I hope to be a world traveler and been given the opportunity to help disadvantage communities around the world.