How does the ratio of the amounts of hydrogen to helium in a star affect what kind of star it is and what kind of light it gives off? 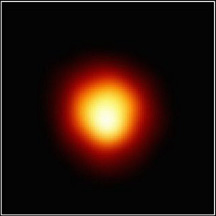 Stars behave like blackbodies. This means that they give off light of all colors, and that their brightness and color depend only on their temperature. So a hot star appears blue and bright, while a cool star appears red and dim.

Light is prevented from escaping the star by the reactions inside it. Instead, the light slowly works its way out towards the surface, where we can see it.