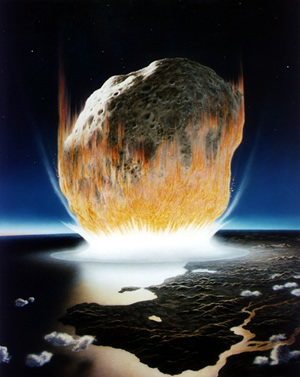 Scientists have developed a new way of determining the size and frequency of meteorites that have collided with Earth.

Their work shows that the size of the meteorite that likely plummeted to Earth at the time of the Cretaceous-Tertiary (K-T) boundary 65 million years ago was four to six kilometers in diameter. The meteorite was the trigger, scientists believe, for the mass extinction of dinosaurs and other life forms.

François Paquay, a geologist at the University of Hawaii at Manoa (UHM), used variations (isotopes) of the rare element osmium in sediments at the ocean bottom to estimate the size of these meteorites. The results are published in this week's issue of the journal Science .

When meteorites collide with Earth, they carry a different osmium isotope ratio than the levels normally seen throughout the oceans.

"The vaporization of meteorites carries a pulse of this rare element into the area where they landed," says Rodey Batiza of the National Science Foundation (NSF)'s Division of Ocean Sciences, which funded the research along with NSF's Division of Earth Sciences. "The osmium mixes throughout the ocean quickly. Records of these impact-induced changes in ocean chemistry are then preserved in deep-sea sediments."

Paquay analyzed samples from two sites, Ocean Drilling Program (ODP) site 1219 (located in the Equatorial Pacific), and ODP site 1090 (located off of the tip of South Africa) and measured osmium isotope levels during the late Eocene period, a time during which large meteorite impacts are known to have occurred.

"The record in marine sediments allowed us to discover how osmium changes in the ocean during and after an impact," says Paquay.

The scientists expect that this new approach to estimating impact size will become an important complement to a more well-known method based on iridium.

Paquay, along with co-author Gregory Ravizza of UHM and collaborators Tarun Dalai from the Indian Institute of Technology and Bernhard Peucker-Ehrenbrink from the Woods Hole Oceanographic Institution, also used this method to make estimates of impact size at the K-T boundary.

Even though these method works well for the K-T impact, it would break down for an event larger than that: the meteorite contribution of osmium to the oceans would overwhelm existing levels of the element, researchers believe, making it impossible to sort out the osmium's origin.

Under the assumption that all the osmium carried by meteorites is dissolved in seawater, the geologists were able to use their method to estimate the size of the K-T meteorite as four to six kilometers in diameter.

The potential for recognizing previously unknown impacts is an important outcome of this research, the scientists say.

"We know there were two big impacts, and can now give an interpretation of how the oceans behaved during these impacts," says Paquay. "Now we can look at other impact events, both large and small."