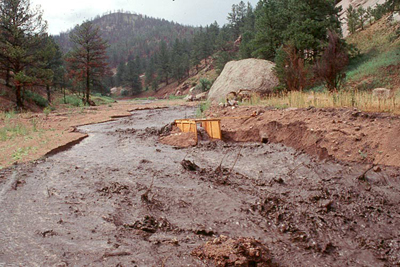 Dangerous flash floods have killed hundreds of people and caused lots of damage to buildings and roads in the Front Range of Colorados Rocky Mountains. The area gets summer flash floods because of its steep valleys and big summer thunderstorms.

Soon, people living near creeks and rivers in this area will be warned of dangerous flash floods. The warming will come from a new tool being tested by the National Center for Atmospheric Research (NCAR).

Its hard to give people warning that a flash flood is going to happen because they happen so quickly. Forecasters can tell when stormy weather might cause a flood. Their radars can detect heavy rain and can tell when a storm has stopped moving, releasing lots of water in one area. But flash floods dont happen every time it rains. They also depend on the soil, the shape of the land and the shape of the river or stream.

The new tool combines weather information with information about the water flowing in streams and the shape of the land. It can give people at least 30 minutes warning before flood waters start rising and possibly as much as an hour or two.

Right now scientists are just testing the tool, but they hope that someday it can be used to keep people safe from flash floods.