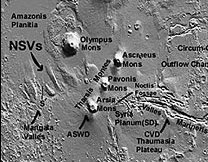 Scientists studying the features of Mars have discovered the largest known valleys in the solar system. These valleys and gorges lie beneath the surface of the planet, under ash, lava, and dust, and were spotted by a satellite in Mars' orbit that can look beneath the surface using lasers. The name of this satellite is the Mars Global Surveyor.

Scientists have found lakes and a river in the highlands of Mars. They don't contain any water, but they may show that the cold, dry planet once had a very different environment where liquid water flowed...more