Under the Arctic Sea Ice

In 2005, thirty-five scientists spent a month in the Arctic Ocean studying the marine life that exists within and below the sea ice and on the seafloor. The scientists found amazing marine life, some of which had never been seen by people before.

As part of their studies, specially trained scuba divers, called ice divers, collected incredible photographs and video that show what it is like to be under the Arctic sea ice. Take a look at some of their photos below! 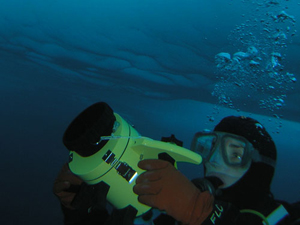 This diver is holding an underwater camera. The sea ice is above the divers head. Do you see the bubbles? This is the air that the divers has exhaled. Sea ice moves on the ocean surface. These pieces of sea ice have pushed together, forming a pressure ridge. Below the pressure ridge, there is a somewhat protected habitat for marine life. These arctic cod are living under the sea ice. Arctic cod prefer temperatures around freezing or just above freezing. Arctic cod are a very important part of the diet of Arctic marine mammals, birds and other fish. 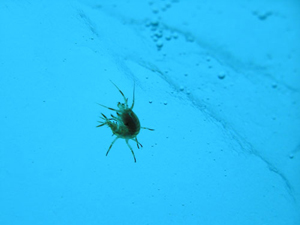 Here's an amphipod, a small shrimp-like animal that lives on the underside of the sea ice. Images courtesy of NOAA Hidden Ocean Expedition
Last modified January 8, 2007 by Lisa Gardiner.

The oceans that are in the polar regions are a bit different from other oceans on Earth. There is often sea ice at the surface, especially during the winter months. And those chilly waters are home to...more

Do you want to learn about how water moves through the Arctic Ocean? Then put your finger on the map on this page. Start on the blue line to the far left of the map. This is where water enters the Arctic...more