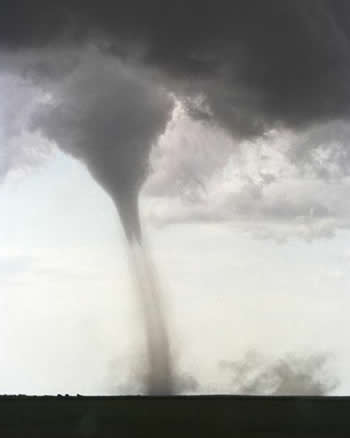 A weak tornado that was seen in Southeast Colorado.
Click on image for full size
Courtesy of University Corporation for Atmospheric Research, Photo by Linda Lusk

Tornadoes come in three different sizes, each with different characteristics. The three sizes are: weak, strong, and violent. Their size is based on how large the tornado is as well as the time that the tornado lasts and how it compares to the Enhanced Fujita Scale.

A weak tornado is the most common type of tornado and makes up 69% of all tornadoes. The least number of deaths happen from this type of tornado, and the longest they can last is a little more than 10 minutes. Winds within this category of tornado are less than 100 mph (161 kph). Weak tornadoes are part of the first two categories of the Fujita Scale (F0 & F1). Damage from a weak tornado can include broken tree branches and peeling off the roofs from houses and buildings.

Strong tornadoes include 29% of all tornadoes. This type of tornado causes 30% of all deaths from tornadoes. Wind speeds for strong tornadoes are between 110-205 mph (177-330 kph). These tornadoes can last 20 minutes or even longer. Demolished mobile homes and overturned trains are part of the damage that could happen from a strong tornado.

While a violent tornado is the least common, it is very deadly. Violent tornadoes make up 70% of all tornado deaths. This type of tornado can last over an hour. Wind speeds for violent tornadoes are typically greater than 205 mph (330 kph). A violent tornado is part of the last two categories on the Fujita Scale (F4 & F5). These tornadoes can do a lot of damage, including throwing cars and picking up well built houses and carrying them for miles.