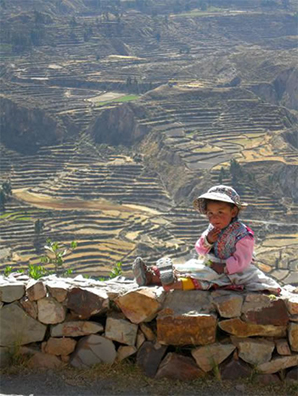 An indigenous young girl in Colca Canyon, Peru. In the background are the famed Inca irrigation terraces still in use today.
Click on image for full size
Photograph by Tamara Smith

Kids' Fun and Games - Climate Science from the Southeast Pacific

Not many people have heard of the Southeast Pacific. That's just the area that includes parts of Peru, Chile, and the Pacific Ocean. Scientists are going to study that area in depth. They will learn about the climate of that large region. Then they'll be able to understand the Earth's whole climate system better. There will be a big team of scientists all working together to make this study a success. They will use many instruments, even ships and airplanes!

And they will write postcards about their exciting experiences! Explore these games and activities to learn more about this interesting study. Most are available in three levels - Advanced, Intermediate, and Beginner. Try Advanced for a real challenge (use the top button bar to change level)!

Fun and Games on Windows to the Universe

The Clouds and Atmosphere Word Search

More Games on Windows to the Universe

Fun and Games - Outside Links

Some of the factors that have an affect on climate, like volcanic eruptions and changes in the amount of solar energy, are natural. Others, like the addition of greenhouse gases to the atmosphere, are...more

The Atacama Desert is one of the driest places on Earth. The lack of water makes life hard, yet more than a million people live there. One place where people get the water they need to survive is from...more