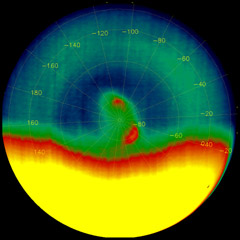 This picture shows the South Pole of Venus. It was taken in infrared light. The yellow area at the bottom is the daytime side of the planet which is lit by the Sun. The two "eyes" of the polar vortex are the red blobs near the pole (at the center of the picture).
Click on image for full size
Image courtesy ESA/VIRTIS/INAF-IASF/Obs. de Paris-LESIA.

Picture - Close-up View of Southern Polar Vortex in May 2006

A vortex is a swirling, circular movement of air and clouds... like in a tornado or hurricane. The plural form of vortex is "vortices". The planet Venus has vortices in its atmosphere above each of its poles.

Sometimes large, bright clouds form over the poles of Venus. They often form and go away pretty quickly. These clouds reflect a lot of sunlight back into space. They make Venus look much brighter. Scientists think the vortices "stir up" the atmosphere. Maybe that mixing makes the clouds.

The atmosphere on Venus is very thick and very, very hot. The thick atmosphere spreads the heat around. On Earth, the North Pole and the South Pole are much colder than the equator. On Venus, it is just as hot at the poles as it is near the equator.

Clouds are the pretty white fluffs you see in the sky. They are made up of tiny water drops. Sometimes, if the wind is fast enough, you can even watch the clouds move. Clouds can come in all sizes and...more

The most common way to locate points on the surface of the Earth is by using lines on a map or globe called lines of latitude and longitude. Latitude describes the location of a place north or south of...more

The following may be the history of Venus. at the conclusion of forming it continued to be hit with leftover material. Venus warmed from inside, and separated into layers. Because Venus is close to the...more