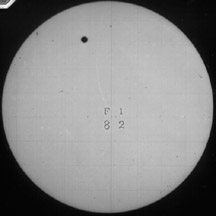 Transits of Venus are extremely rare astronomical phenomena. They occur in pairs, separated by eight years, with more than a century elapsing between successive pairs of transits. There will be two Venus transits in the 21st century, on June 8, 2004 and June 6, 2012.

The first observations of a transit of Venus were made in 1639 by Jeremiah Horrocks and William Crabtree. They refined Kepler's original predictions of Venus' orbit in order to determine the correct date of the 1639 transit.

Edmond Halley published a paper in 1716 describing how transits could be used to determine the distance from Earth to the Sun. At that point, astronomers didn't know how far we are from the Sun or the scale of distances within our Solar System in general.

In order to determine the Earth-Sun distance (called the Astronomical Unit, or AU) using a transit, astronomers needed to make observations of the transit from different locations on Earth. Ideally, such measurements should be made at locations as far apart as possible. During the pairs of transits in the 1700s and 1800s, astronomers organized expeditions to the far "corners" of the world to make the detailed observations required. The scientists successfully gathered the required data, and were thus able to make the first accurate estimates of the size of our Solar System and of the distance from Earth to the Sun. The values they calculated were very close to the currently accepted figures, which have been determined by bouncing radar signals off nearby planets.