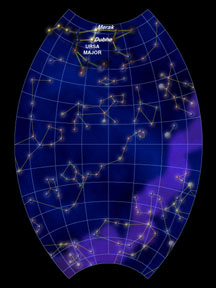 Merak is called a Pointer star because it points to the North Star, Polaris. Start with Merak's neighbor, Dubhe, and draw an imaginary line through Merak. Continue the line north and you will reach Polaris.