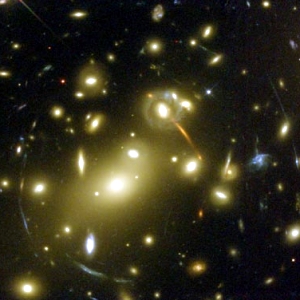 Scientists have proposed the existence of "dark matter" halos around individual galaxies and clusters of galaxies. Dark matter is material which affects the objects around it through gravity, but which emits no light of any wavelength that we can detect. Astronomers suggest that we see only the "tip of the iceberg" when we use our large telescopes to look out into space.

A relatively new method used by astronomers is to look for a change in the way light behaves, due to gravitational lensing. It is somewhat akin to how you avoid running through sliding glass doors. If the glass is very clean and you get no reflections, how can you tell the door is there? Your eyes perceive that the light from outside is bent, and infer that something is bending it, namely the door. Note that you didn't see light FROM the door, but you saw the effect made by the door on light from objects behind it. Similarly, we can use telescopes to look at light from very distant objects behind the clusters of galaxies we are interested in to study the clusters.

The possibility that the path of light could be bent by the gravity of a large object was predicted by Einstein's Theory of General Relativity, and this effect was observed soon after the theory was published. Because people normally think of glass or plastic lenses as bending light, we call any massive object that bends light rays a "gravitational lens." Astronomers now use specialized electronic cameras on large telescopes to very carefully measure how much the light from background objects is bent. By analyzing the amount of bending, we can then determine the mass of whatever is doing the bending.

In the cluster Abell 2218, distant blue galaxies behind the large cluster of galaxies are "squished" into a circular shape around the middle of the foreground cluster. By measuring the amount of distortion in the more distant blue galaxies, we can determine that there is indeed "dark" matter in the cluster! In fact, we can even measure how much mass there is that we can't see -- this galaxy cluster happens to have nearly 400 trillion times the sun's mass in "dark" matter.

A Long Time Ago in A Galaxy Far, Far Away...

A NASA Hubble Space Telescope (HST) image recently revealed the most distant galaxy found in the universe to date. Scientists had merely planned to take an image of the galaxy cluster CL138+62. But it...more