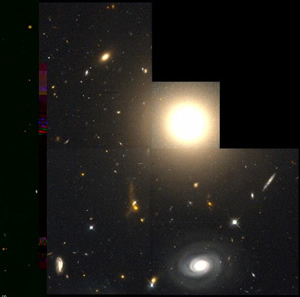 Elliptical galaxies are generally egg-shaped. If you have the chance to see one through a small telescope, it will probably look just like a fuzzy smudge to you, a piece of lint. But it is really formed of many billions of stars orbitting the center of the galaxy.

Each elliptical galaxy is assigned a number ranging from 0 to 7 which represents how elliptical it is. The most elliptical galaxies are a 7, while a galaxy which appears circular is a 0. Their shape may tell us something about how the galaxies formed and evolved. Elliptical galaxies also come in a range of sizes from giants, which are very massive and bright, to dwarfs, which are small but which may be very numerous. In fact, ellipticals are both the largest and smallest galaxies known!

We think of ellipticals as old because they have not formed any new stars recently, unlike spiral galaxies which are forming new stars even now. They appear not to have very much cool gas or dust from which to form stars.

Elliptical galaxies are the dominant type of galaxy in most clusters and groups of galaxies. In our own Local Group, for example, there are no large ellipticals, but many dwarf ellipticals orbiting both the Milky Way and the Andromeda galaxy.