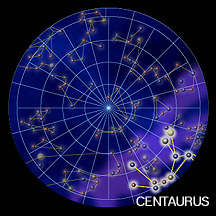 Below the stars of Hydra, the sea serpent and Scorpius, the scorpion, you can find Centaurus. Centaurus is a half-man, half-horse creature. He faces east holding a lance which he is using to defend himself from Lupus, the wolf.

Centaurus' brightest star is called Toliman or Rigel Kentaurus. Toliman is the third brightest star in the sky and is the closest star to the Sun. The largest and brightest globular cluster in the sky is in Centaurus. The cluster's name is Omega Centauri. To your eye, it will look like a fuzzy ball, but it is really made up of more than a million stars.

The constellation Ophiuchus is known as the Serpent Bearer. In Greek myth, he was the god of medicine. One day he killed a snake, but another serpent appeared and healed his friend with plants. Ophiuchus...more