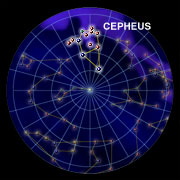 The constellation Cepheus.
Click on image for full size
Windows to the Universe original image

Cepheus was king of a land called Ethiopia in Greek myth. He had a wife named Cassiopeia and a daughter, Andromeda. Cassiopeia liked to brag about her beauty so much, that she said she and Andromeda were more beautiful than the Nereids. Poseidon got very angry, and sent a sea monster to kill Cepheus and his family.

Andromeda was offered as a sacrifice, and just when the sea monster was going to eat her, Perseus saved her. All four people, along with the monster, are in the sky as constellations.

Cepheus looks like a house. The point on top is a special star called a cepheid. These stars are used to measure long distances. Just below the constellation is another cepheid. This red star would be the North Star if we lived on Mars.

There are several galaxies, star clusters and nebulae within Cepheus. However, most are very dim and can only be seen with a telescope. If you have a telescope to use, browse this old constellation to find many celestial objects.

In Greek mythology, Andromeda was the daughter of Cassiopeia and Cepheus, the king of Ethiopia. Andromeda's mother claimed that they were more beautiful than the sea nymphs, the Nereids. The Nereids felt...more

The constellation Cetus represents the Sea Monster. It is one of the largest constellations known. In classical civilizations, the figure was the giant sea monster that almost ate Andromeda. King Cepheus...more

Perseus was an ancient Greek hero. His mother was Danae, the daughter of Acrisius, the king of Argos. When a prophecy revealed to Acrisius that his grandson would kill him, Acrisius imprisoned his daughter...more

Perseus, the Hero, can be found in the sky during the winter in the Northern Hemisphere. With a little imagination, you can see the image of a man in the stars. He has a sort of triangular body, with...more