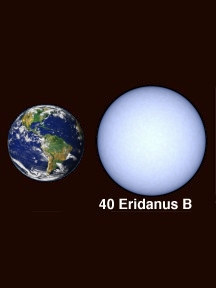 This drawing compares the Earth to the star, 40 Eridani B. Eridani B is a white dwarf in the constellation, Eridanus, "The River". It is very heavy for its size.
Travis Metcalfe