Assess student abilities to work together as a team, create and interpret topographic maps, analyze graphs and data plots, as well as apply learned information to make solid deductions about the social, economic and natural repercussions of sea level rise on coastal communities.

Use safe laboratory practices at all times.

Wash and dry all lab equipment and properly store for future use.

1. Have students explore the fact that sea level has changed many times in the past with the classroom activity Mapping Ancient Coastlines.

2. Have students investigate various appliances and electronics to discover how much energy each uses and how much carbon dioxide (CO2) is released to produce that energy. Use the classroom activity Plugged in to CO2.

3. Have students complete a homework assignment where they calculate their carbon footprint and (depending on the grade level of student) their family's carbon footprint. After results have been calculated, lead students in a discussion about the following ways to reduce one's carbon footprint and add to the list by having students share their ideas from their student worksheet and from further brainstorming during the class discussion. Here's some ideas to get your class started:

-Turn off electronics and electrical appliances when not in use
-Turn down the heat 2 to 4 degrees
-Turn up the air-conditioning 2 or more degrees
-Turn down your water heating (2 degrees will make a significant saving)
-Completely fill your dishwasher and washing machine before running them
-Unplug your MP3 player, mobile phone, laptop, etc. as soon as it has finished charging
-Install energy-saving light bulbs as the current ones burn out
-Carpool to work or school
-Use public transportation whenever possible
-Don't buy bottled water if your tap water is safe to drink (especially if it has been shipped from far away) -Buy local fruit and vegetables, or even try growing your own
-Don't buy fresh fruit and vegetables which are out-of-season
-Try to buy products made closer to home
-Buy organic produce
-Recycle as much as possible
...and many others!

5. Two research topics are written up in the Application and Extensions area of the Student worksheet. Assign these as a further investigation (or not - as time allows!).

A topographic map is often a very large-scale map that shows the shape of the land's surface. Contour lines are imaginary lines that connect places of equal elevation. If you were taking a hike along a hillside and not walking either uphill or downhill, you would be walking on a contour line. When contour lines are close together, the slope is very steep. When contour lines are far apart, the slope is very shallow. This type of map is helpful when planning a hike. It is also used when planning the site for a building or the path of a new road. The shape of the land also greatly determines how sea level rise will affect a given coastal area.

Sea level change has happened at various times in Earth history. Global sea level can rise because glaciers melt, adding water to the oceans, or when plate tectonic movements diminish the ocean basins displacing water onto the edges of continents. It is a natural process that has gone on since there have been oceans on Earth. Over recent geologic history, sea levels have changed rapidly by geologic standards due to the repeated formation and melting of glaciers.

One thing is certain - global warming is now causing a rapid rise in sea levels. Over the past 100 years, as the climate has warmed, sea level rise has accelerated, rising by about 7 inches, or 17 centimeters. Currently, global (or eustatic) sea level is rising about 3.3 mm per year (about 1/8 inch.)  There is a high level of uncertainty about how much sea level rise we can expect for the 21st Century.  The Intergovernmental Panel on Climate Change estimates between 18-59 centimeters (7-23 in) of sea level rise. Some scientists predict an even greater rise in sea level, anywhere from the conservative 7 inches to more than 3 feet, or 18 centimeters to more than a meter of sea level rise within this Century.

How does global warming cause sea level to rise? There are two reasons.  First, when climate warms, water that is on land in glaciers and ice sheets melts and makes its way down rivers to the ocean.  Second, as seawater warms up, the water molecules move further apart causing the water to expand.  Scientists suspect that this expansion of seawater accounts for more than half the amount of sea level rise we see today.

There will be many social, economic, political and ecological repercussions of this rapid rise in sea level. The low-lying coast of Bangladesh in South Asia is home to millions of people, yet the amount of sea level rise predicted for the 21st Century is expected to change that, flooding homes with seawater and impacting an estimated 13 million people. Bangladesh is one of many coastal areas worldwide where homes, towns and cities are in jeopardy of being flooded as sea level rises due to global warming.

Worldwide, there are large human populations living in coastal areas that would be adversely affected by changes in sea level. About half of the world population lives within 200 km (124 mi) of a coast. As sea level continues to rise, more of these people will be affected by flooding and coastline erosion.  Freshwater supplies could become contaminated with salt water and in places like Bangladesh there will likely be less land suitable for growing rice or other crops.  Sea level rise will also have ecological impacts like the destruction of established wetlands, natural beaches, and breeding grounds for many animals. Governments are already taking steps to reinforce coastal areas using new technologies, hopefully protecting them in some ways from rising seas. However, many countries do not have the financial resources to take such measures.

This photo was taken after a recent storm in the Outer Banks. It shows sea water breaching a temporary barrier (in this case sand bags) that was put there to keep sea water away. Sea level rises affect each area differently depending on the geology and geography of the area. The photo was taken by Dr. Benjamin Horton, who was featured in the Changing Planet video, and who does sea level research. 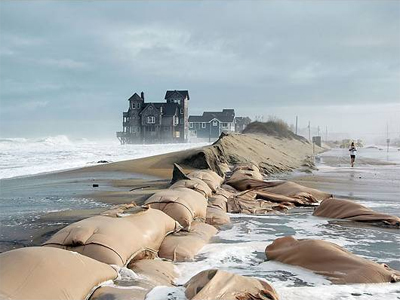