Permafrost is frozen ground where the temperature remains below freezing year around for two or more years. Permafrost can have different characteristics and be found in different forms. It can contain organic-rich soil or be sandy and rocky. It can even be solid rock. It may contain frozen water or be relatively dry.  But all permafrost has one important characteristic in common; it is frozen.  Global climate change is having an impact on permafrost.  Scientists are finding that permafrost is thawing to the point that it is affecting people, wildlife and climate of the latitude regions.  Hidden in the frozen permafrost at many locations are large quantities of organic matter, and if too much of the permafrost were to thaw, then the subsequent decomposition of the organic matter by microbes could release massive amounts of methane into the atmosphere.  Methane has been identified as a very powerful greenhouse gas which contributes to global warming. In this investigation, you will investigate the characteristics of permafrost, the locations of permafrost and the correlation between thawing permafrost and quantities of atmospheric methane.

1.  To gain an understanding of permafrost, log onto NSIDC: All about Frozen Ground (http://nsidc.org/frozenground/index.html), and visit the following sections of the website.

How does it form?   (Be sure to define “active layer” in your answer)

2.  Also visit and briefly summarize the contents of these 2 sections of the website:

4.  Open the Arctic Portal Mapping tool (http://portal.inter-map.com) and familiarize yourself with the layout of the tool.   (see Figure 1) 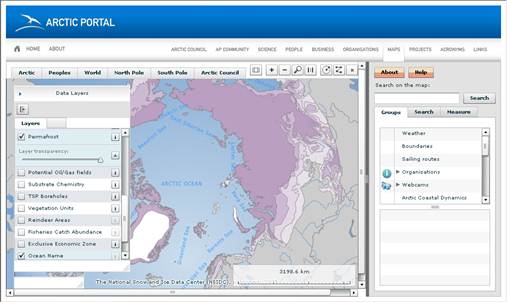 Figure 1: Screenshot of Arctic Portal with the permafrost layer turned on.

Note that there is a Groups menu on the right of the page and there are Data Layers in a menu sitting on top of the mapping tool.  Take 10 minutes to practice using the tool by turning layers on and off, and clicking on the information buttons that pop up on the map.  Hold your mouse over each of the tools at the top of the map to learn what you can do with each.  You can move around the two small menus on the map so that you can see more of the map, and you can also enlarge the map to full screen.  If you gently hold your mouse over the various layers, the labels will appear.

5.  To get started, turn on Boundaries in the Group menu and Permafrost in the Data Layers menu.  Use the icons to define the different Arctic boundaries.

Click on the small "i" next to the permafrost layer to bring up the definitions of the layers.  Define the terms below:

6.  Use the Arctic Portal to answer these questions focused on Alaska.  If you are unfamiliar with the shape of Alaska, use the Internet to locate a map of Alaska.

Use the measuring tool to determine the distance in kilometers of each boundary across the state of Alaska from the Gulf of Alaska to the Beaufort Sea:

7.  Turn off all the boundary layers except the 10°C July Isotherm, Tree line and the Arctic Circle.

Why do you think this is so?

Turn off the permafrost layer and turn on the vegetation layer.  What type of vegetation can be found in this region?

Turn the vegetation unit layer off and the permafrost layer back on.  As you move to the Gulf of Alaska, what type of permafrost is predominant in this region?

8.  Use this map tool to investigate other layers while focusing on Alaska.  Describe your findings here: 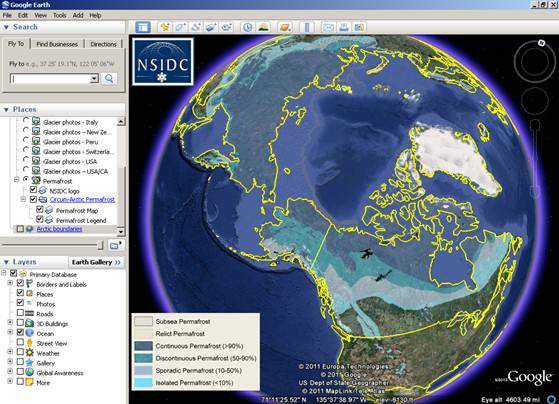 What is the percent cover for each type of permafrost in the Northern Hemisphere?

In which states can it be found?

Why do you think the permafrost is found only in these locations?

3.  Note that now you can see the subsea permafrost.

Use the measuring tool to measure in kilometers the extent of the subsea permafrost from northern Alaska into the Beaufort Sea.

4.  Open the University of Alaska Permafrost Laboratory Site Layer in Google Earth Map while the NSIDC permafrost layer is open to explore borehole data that has been collected over long periods of time. (see Figure 3) 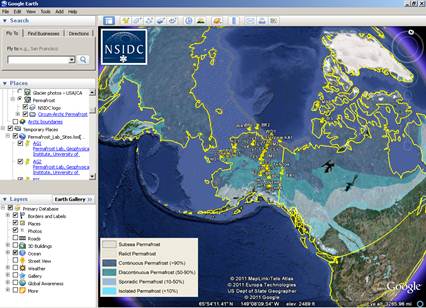 Boreholes are used to measure the temperature of the permafrost.  Notice the transect of borehole sites across the state of Alaska.  Why do you think the scientists placed the boreholes at these locations?

5.   Figure 4 below is an example of the type of graph you will be interpreting for select borehole sites.  Each site was visited once during the summer and electronic temperature sensors were used to collect temperature data at numerous depths.  To practice interpreting the data, answer the questions below. 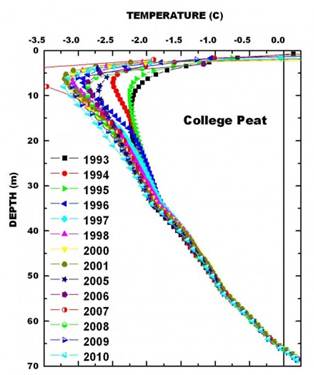 The data appears to follow a similar trend over the years, although there are subtle variations.

6. Locate the boreholes in Google Earth and fill in the table with data from these locations. While you are using Google Earth look at the pictures taken at these sites to get a sense of what the landscape looks like in the Polar Regions.

Use the handout with the permafrost borehole data or the data from the Google Earth layer to extract the temperatures (°C) at these depths for the years listed.

7.  Carefully analyze the data for trends with depth at each location.  Has the permafrost warmed, cooled, or stayed the same in each of the time periods?

8.  Summarize your findings from the table.  What other datasets could you use to investigate the above data further?   Why?

Climate models projecting into the future show that as global temperatures rise large quantities of the current permafrost will thaw. (see Figure 5) 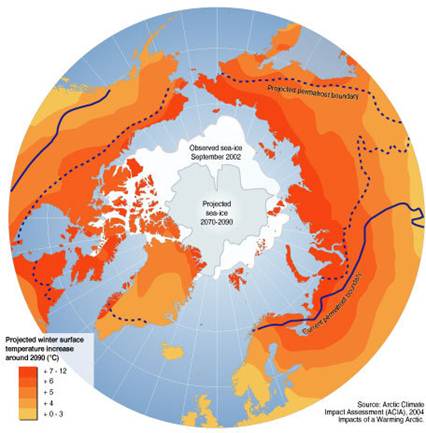 Figure 5: The averages of the scenarios in the Arctic Climate Impact Assessment (ACIA) are presented in this figure, for the year 2090, with the surface temperatures over land, the size of the polar ice cap, and the outer limits of permafrost.

(This graphic was created by Hugo Ahlenius, UNEP/GRID-Arendal using data from ACIA. Acquired from http://maps.grida.no/go/graphic/projected-changes-in-the-arctic-climate-2090)

Buried below much of the oxygen poor permafrost is organic matter.  As temperatures in Arctic rise and the permafrost thaws the organic matter will go through anaerobic decomposition releasing methane into the atmosphere as a by-product.   Methane is a powerful greenhouse gas.  Although there is much less methane in the atmosphere than carbon dioxide, it traps heat about thirty times as efficiently as carbon dioxide.  There are two origins of methane in the Arctic: 1) trapped within the ice crystals found in deep locations of high pressure and low temperatures; and 2) in organic matter frozen in the permafrost. 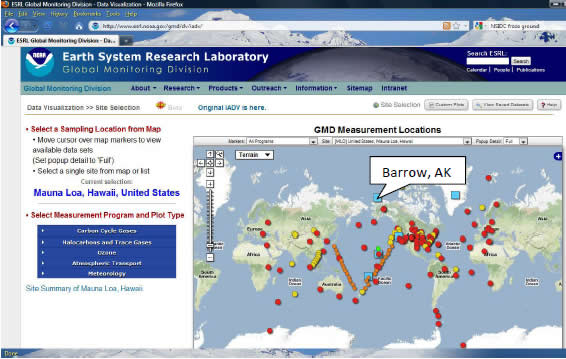 The graph below is the atmospheric methane data for Barrow Alaska, and it includes the time period for the borehole data in Part 2.  Each data point represents a month in the year. 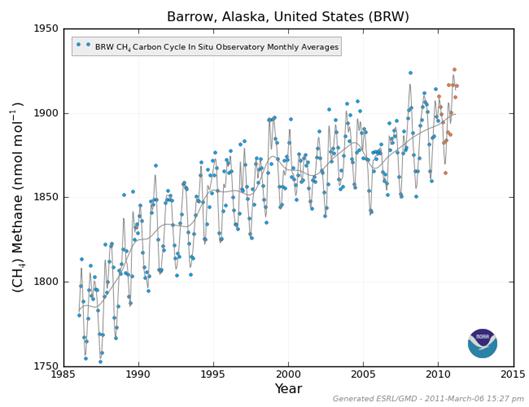 1.  There is an annual fluctuation in the quantity of methane at this location where the quantities are higher in the fall and winter months and lower in the summer months. Why do you think this is so?

2.  What is the overall trend in this data?

3. What is the trend in the data for dates represented in Part 2 of this lesson?

4.  Within this you utilized only two sets of data.  What other datasets would assist you in correlating the changing temperatures of the permafrost with the changing levels of atmospheric methane?  Explain your rationale for selecting these other datasets.

1.  Think about the reservoirs, sources, and sinks within the carbon cycle along with the role of photosynthesis, and the northern hemispheric distribution of photosynthetic organisms.  Use the space below to outline a sequence of events that would occur should the permafrost continue to thaw and release large quantities of methane into the atmosphere.  Keep in mind that the Arctic currently takes in more carbon than it releases, and therefore is a carbon sink.  Use the resources from this lesson to support your discussion.  Revisit the NSIDC Frozen Ground website for further assistance.