Assess student abilities to analyze maps and data plots, as well as synthesize and apply information drawn from multiple lines of data.

Clean and store all lab materials for future use.

When the ground under your feet is frozen, interesting things can happen. The land may be covered with circles, polygons, or stripes, called patterned ground, which form as the land freezes. Trees may be few and far between, their roots unable to penetrate the solid ground, leaving the land to only the short tundra plants or no plants at all. Unique hills called pingos, made mostly of underground ice, may dot the landscape, growing larger over time if more ice is added to their core. Or big blocks of land that were once flat may be thrust upward like detached puzzle pieces in areas called blockfields.

That frozen ground is called permafrost. Permafrost can have different characteristics and be found in different forms. It can contain organic-rich soil or be sandy and rocky. It can even be solid rock. It may contain frozen water or be relatively dry. But all permafrost has one important characteristic in common. It is frozen. Permafrost is ground that is below the freezing point of water (0°C or 32°F) for two or more years. Permafrost is found at high latitudes like the Arctic and Antarctic. It is also common at high altitudes - like mountainous areas – wherever the climate is cold. Today about 20% of the land surface is frozen permafrost. Permafrost is considered part of the cryosphere because it is frozen. However, it is also often considered part of the geosphere because it contains rocks and soils.

The top surface of permafrost - called the active layer – usually thaws and refreezes with the seasons. The active layer may only be half a meter thick or it may be as much as four meters thick. Plants can survive if there is an active layer because their roots can penetrate the softened active layer and they can find the water they need to survive. The following photo shows the range in temperatures experienced at different depths in the ground during the year. The active layer (shown in grey) thaws each summer and freezes each winter, while the permafrost layer remains below 0°C. 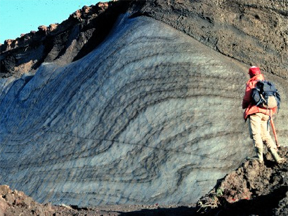 Courtesy of the Geologic Survey of Canada

In some areas of the world, permafrost extends very far underground. Under Barrow, Alaska (US), there is 440 meters of permafrost and in areas of Siberia (Russia) the permafrost is about a kilometer and a half thick. It took a long time for the ground to freeze to such depths. Shallower permafrost can form relatively quickly; the first hundred meters of ground can freeze in only several hundred years. But it took a much longer time, tens or even hundreds of thousands of years, for ground to freeze to depths of several hundred meters. For example, in a mere 350 years of cold climate the ground can freeze to about 80 meters depth, but it takes ten times as long to freeze to about 220 meters depth. Scientists estimate that it took more than half a million years for the deep permafrost underlying Barrow, Alaska to form.

Compared to the long time it took to form, permafrost has been thawing relatively quickly in recent years. Scientists have found that the rate of permafrost thaw has increased because of global warming.

Temperature measurements taken in deep boreholes, such as those shown in the graph below, show that permafrost temperatures have increased significantly over recent years. Data like this has been collected from permafrost-covered lands (and ocean floors) in northern North America, Europe and Asia over the past 50 years. The data from different locations shows similar trends toward permafrost thaw over time, and the thawing trend appears to be accelerating.

As permafrost thaws, the land, atmosphere, water resources, ecosystems, and human communities are affected. In some natural areas, forests have turned into wetlands filled with newly available water that was once trapped in the ice. The thawed ground is often less stable causing trees to topple and lean in odd directions. These areas are called drunken forests. Homes and other buildings built on frozen ground settle or collapse as the land thaws. More than 300 buildings in and around Fairbanks, Alaska (US), have been affected by thawing permafrost. When the ground thaws, coastal areas and hillsides are also vulnerable to erosion. Unstable slopes can pose a danger for human settlements and roads. The eroding ground can cause damage to pipelines too.

Most people know methane is a greenhouse gas, but many don't know that methane is a greenhouse gas more than 30 times more potent than carbon dioxide. It is released from previously frozen soils in two ways. When the organic material (which contains carbon) stored in permafrost thaws, it begins to decompose and, under anaerobic conditions, gradually releases methane. Methane can also be stored in the seabed as methane gas or methane hydrates and then released as subsea permafrost thaws. These releases can be larger and more abrupt than those that result from decomposition.

The illustration above shows the permafrost of the East Siberian Arctic Shelf under the ocean (an area of about 2 million kilometers squared). Recent studies have shown it is more porous than previously thought. The ocean on top of it and the heat from the mantle below it warm it and make it perforated like Swiss cheese. This allows methane gas stored under it (and thus under pressure) to burst into the atmosphere. The amount leaking from this locale is comparable to all the methane coming from the rest of the world's oceans put together.

It is so important to continue monitoring these terrestrial and oceanic sources and reservoirs of methane and to understand the processes that cause methane to be a sink or a source. It is certain that methane will be a driving force in future global climate change.