Assess student abilities to work together as a team, as well as apply learned information to make solid deductions about the future implications of global warming on species such as birds and butterflies.

Use safe laboratory practices at all times.

Have students help clean up their lab areas and properly store materials for future use.

On Darwin's Visit to the Galapagos Darwin believed that the process of evolution took too long for us to observe it happening. But the finches of the Galapagos were an example of evolution taking place and he wrote about them in his book called “The Voyage of the Beagle” (he did not publish the basic tenets of Natural Selection in "The Origin of Species" until 1859). Darwin decided that these finches all used to have bills like other finches, but when they came to live on the Galapagos and started eating different things, their beaks changed over thousands of years. This is called divergent evolution. Since he described the finches, a number of researchers, including Peter and Rosemary Grant (who wrote “The Beak of the Finch”) have traveled to the Galapagos Islands to conduct more detailed research.

Many of the finches in the Galapagos are not yet distinct species because they are still able to reproduce. However, as they are separated onto different islands, physical barriers prevent groups from reproducing. Different species may develop when a population is divided and then the groups evolve in separate ways. This is called allopatric speciation. If the two parts of the population evolve in different ways and then are able to come back together (if the geographic barrier is removed), the two populations may compete with each other. Or, they may have developed specializations that allow them to no longer need the same food type or nesting space, so they may be able to live in the same space without competition.

The term "global warming" often evokes images of unbearably hot summers. While it is true that summertime high temperatures are rising worldwide, it often surprises people to learn that in seasonal environments around the world - those characterized by cool or cold winters and warm or hot summers - winter is the most rapidly warming season. In fact, by many measures winters are warming at nearly twice the rate of summers.

One direct consequence of a warmer and shorter winter is the earlier onset of spring temperatures. Across the entire Northern Hemisphere, spring is arriving earlier at a pace of approximately 1.2 days per decade. Land surfaces are also retaining more heat during the summer, leading to persistent summer temperatures that linger into the fall. Thus, with regard to the temperatures that permit plants to grow, an earlier spring and a persisting summer means that the growing season is expanding (whether plants will receive enough rainfall to take advantage of these warmer temperatures is an unresolved question of great concern). Across Europe, for example, the growing season expanded 10.8 days during the period 1960-1999 (6 days toward an earlier spring, 4.8 days toward a persisting summer).

While these might seem like small changes, the natural world is actually responding in observable, dramatic, predictable (and in some cases, unpredictable), and potentially problematic ways. Summarizing more than 29,000 observational data series that demonstrate significant changes in physical and biological systems, the IPCC reported in 2007 that more than 89% (25,810) of those changes are in the direction expected as a response to climate change. In the biosphere, these changes tend to fall into two categories: responses in space and in time. 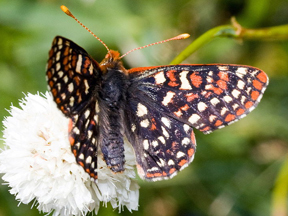 On a spatial scale, many species of animals and plants have expanded their geographic ranges poleward in latitude (northward in the northern hemisphere; southward in the southern hemisphere) and upward in elevation over the last century, following shifting temperatures. As higher elevations experience more mild winters, for example, species from lower elevations may expand their range towards higher elevations because they can now tolerate the winters there. The same may be true across latitudes; species from lower latitudes (i.e., closer to the equator) may expand their range toward higher, or poleward, latitudes. These "range expansions" can be advantageous for species that can disperse easily, but they can threaten the existence of less mobile or more sensitive species. In general, butterflies are following these trends (moving poleward and upward), but keep in mind that means butterfly species experience dramatic patterns of extinction along the edges of their range (the edge they are moving away from).

Of course, migration into new territory is often impossible, as habitat fragmentation due to human activities (such as the building of housing developments, golf courses, highways, or shopping malls) or the existence of natural barriers such as rivers or mountain ranges can prevent the movement (or dispersal) of seeds and fruits, and of young, pregnant or nursing animals.

On a temporal scale, living organisms respond to the expanding or shifting growing season by changing their phenological schedules (remember phenology is the study of periodic plant and animal life cycle events and how these are influenced by seasonal and interannual variations in climate). Thousands of biological records spanning both the globe and the 20th century indicate a nearly ubiquitous shift in spring phenology toward earlier calendar dates. Organisms are tracking an earlier start to the growing season by emerging from dormancy earlier (mammals, insects), migrating earlier (birds, insects, mammals), developing new leaves and stems earlier (plants), and breeding earlier (mammals, insects, birds, plants). Not surprisingly, similar delays in autumn phenology are occurring due to a persisting summerdeciduous trees are shedding their leaves later than they used to, and birds and mammals are migrating later in the autumn than they used to.

As you can imagine, the consequences of phenological shifts will depend on the level of biological organization that we investigate. For a long-lived individual tree, for example, leafing out several days earlier each spring may allow it to get a rapid head start in its annual growth, especially if neighboring trees remain leafless, which would allow its leaves to receive a great deal of sunlight. On the other hand, if it produces its leaves earlier than any of the other members of its population, it may be particularly vulnerable to leaf-eating insects (e.g., moth and butterfly larvae, leaf miners, and leaf-cutting ants) simply because it will be a rare and limited resource for them.

The effects of a phenological shift on a given population of a species will also depend on whether the other species on which it relies  for food, pollination, or seed dispersal  change with it. For example, if populations that benefit from each other respond differently to climate change (e.g., if a plant population flowers on average five days earlier but its pollinators haven't arrived), then one or both of them may exhibit population declines. On the other hand, if a population flowers early enough to "escape" one or more of its "natural enemies" (e.g., flower bud-eating beetle larvae), it may reap the benefits of high flower and fruit production.

At the community level, predictions are highly elusive. We've learned from radio-tracking and bird-banding efforts that birds are returning to spring and summer breeding grounds earlier and earlier, but the effects of these altered migration patterns on both the birds and the species with which they interact (as predators or as seed dispersers) are likely to be highly species- and community-specific. Nevertheless, there are several rules of thumb that probably apply.

First, the more specialized the relationship between species, the more vulnerable each of them is likely to be to the phenological effects of climate change. For example, plant species that are pollinated by only one species of pollinator are more vulnerable to losing these pollinator services than are species that are visited by a wide range of pollinator species. Similarly, insects that rely on a single plant species as their food source may experience severe population declines if their emergence times are mismatched with the growing or flowering season of their host plant.

Second, animals that habitually migrate between geographically distant biomes to complete distinct portions of their life cycles (e.g., growth and sexual maturation vs. breeding) are particularly vulnerable to the phenological effects of climate change simply because there are more inter-specific interactions that may be disrupted. Such species must continue to exhibit a phenological schedule that is viable given the co-occuring species and the climate in each of their "home" habitats. For example, species of birds that migrate over long distances must co-occur with their food sources (while avoiding their enemies) in the biome in which they grow and reach sexual maturity, and then, following migration to their breeding grounds, they must be in synchrony with the food sources that they feed to their newborns. Migratory animals must meet these demands while also avoiding the natural enemies that destroy them.

These shifts in spatial and temporal range are what scientists call the "fingerprint of climate change." Phenological schedules are changing rapidly and at different rates for co-dependent species such as plants and pollinators. There is an increasing number of reports in recent years of population crashes in the wild due to such asynchronous responses to climate change among co-dependent species, but scientists are only beginning to learn how widespread they are and in how many different kinds of organisms they occur.

Within this century climate change and other global changes such as change in land use and pollution will collectively be too much for many ecosystems to handle and they will not be able to adapt. Twenty to thirty percent of plant and animal species will become extinct if global average temperatures increase 1.5 - 2.5°C, which is within the range estimated by computer models for 21st Century.

Given these grave predictions, it is obviously essential to encourage students to think deeply and creatively about these issues - big problems demand big solutions!