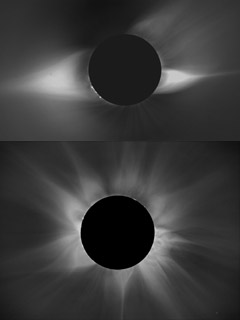 Some of the time the Sun's atmosphere is very different over the Sun's poles from its atmosphere over its equator. Sometimes the solar wind that "blows" outward from the Sun is different at the poles, too.

About every 11 years the Sun has very few sunspots for a while. Scientists call these times "solar min". During solar min, the Sun's atmosphere looks different from other times. The corona is the Sun's upper atmosphere. We can see the corona during a solar eclipse or by using a special instrument called a coronagraph. Pictures of the corona at solar min have streamers flowing away from the Sun's equator. But usually there aren't any streamers coming from the poles!

Sometimes there are lots of sunspots. Those times are called "solar max". Sunspots have very strong magnetic fields. When there are lots of sunspots, the Sun's magnetic field becomes a tangled mess. Eclipse photos and coronagraphs show streamers shooting out from all parts of the Sun at solar max. They don't just come from the equator the way it is at solar min. Also, the solar wind is different at solar max. Both fast and slow solar winds can "blow" outward from all parts of the Sun.