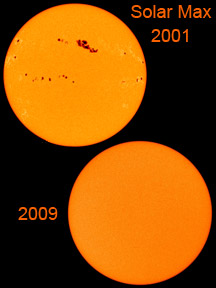 There were lots of sunspots at solar max in 2001. During the "deep" solar min that followed sunspots were very rare for several years.
Click on image for full size
Images courtesy of SOHO/NASA/ESA.

Where have all the sunspots gone?

The Sun is missing its spots! Sunspots, that is. Most of the time there are at least a few sunspots on the Sun. Sometimes there are lots of sunspots. Scientists call those times "solar max". Other times there are fewer sunspots. Those times are called "solar min". Normally sunspots come and go in a cycle that lasts about 11 years.

Why are scientists interested in this unusual sunspot minimum? Sunspots tell us a lot about how active the Sun is. When the Sun has lots of spots, its magnetic field is all scrambled up. It gives off more radiation, especially the high-energy and dangerous X-rays and ultraviolet (UV) radiation. Explosions on the Sun - solar flares and coronal mass ejections - happen more often. Those explosions can cause space weather "storms" all over our Solar System. When the Sun is calm and has few spots, there is less radiation and fewer explosions that cause space weather storms.

Scientists wonder what will happen next. What does this extreme sunspot minimum mean for the future? Will the next sunspot max have fewer sunspots, or more? Or will it be an average solar max with a normal number of sunspots? We'll just have to wait and see!