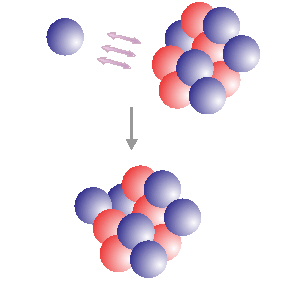 Schematic view of the neutron capture process by a nucleus.
University of Oregon

Neutron capture can occur when a neutron approaches a nucleus close enough for nuclear forces to be effective. The neutron is captured and forms a heavier isotope of the capturing element.

When the new isotope is unstable the neutron decays into a proton (beta decay)) with the emission of an electron and of a neutrino. The following movies illustrate two neutron capture processes and subsequent element transmutation.

Atoms have two main parts: a massive nucleus at the center and a swarm of fast-moving electrons around it. The nucleus is made up of protons and (usually) neutrons. Almost all of the mass (more than 99%)...more

The protons in the nucleus of an atom have a positive charge. If protons come near each other, they are usually pushed apart by the electromagnetic force. (Remember, opposite charges attract, but like...more