These particles are responsible for many wonderful natural phenomena such as the aurora and natural radio emissions such as lion roars and whistler waves. Other phenomena include the donut shaped torus which circulates with moons which are inside the magnetosphere. The moons have wakes and wings associated with them while inside the magnetosphere. 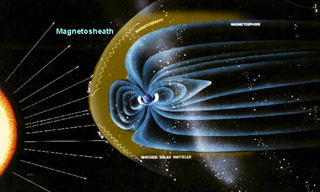 The plasmasphere is a torus-shaped region within the Earth's magnetosphere. The Earth's plasmasphere is made of just that - plasma. It has a very sharp edge called the plasmapause at equatorial distances...more

The Earth's radiation belts are one component of the larger and more complex system called the magnetosphere. The radiation belts of the Earth are made up of energetic, electrically charged particles or...more

Besides the beautiful aurora at the north and south poles, the magnetosphere generates lots of noisy radio signals. These signals are the signature of some mechanism which is transporting particles, causing...more