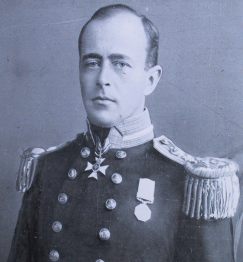 Robert Falcon Scott was an Antarctic explorer, who came in second in a famous "South Pole Race" with Roald Amundsen and died while returning from the pole. Scott became a tragic hero of the age of Antarctic exploration.

Robert Scott was born in 1868 near Devonport in England. He left home at the age of 13 to join the Royal Navy and begin his training. From 1901-1904, Scott commanded the National Antarctic Expedition in which Ernest Shackleton also took part.

In 1910, Scott embarked on his second polar expedition. Soon he found out that Roald Amundsen was also heading for the South Pole. Scott's expedition spent a year preparing to reach the pole and making scientific observations. Finally, Scott with four other men reached the South Pole in January 1912, where they discovered that Amundsen has been there a month earlier. On their way back, they suffered from unusually cold weather, frostbite and lack of supplies. Finally, on March 29, Scott made the last entry in his diary: "We shall stick it out to the end, but we are getting weaker of course and the end cannot be far.It seems a pity, but I do not think that I can write more. R. Scott. For God's sake look after our people". The tent with bodies of Robert Scott and two of his companions was found eight month later by a search party.

When the news of their tragic death reached Britain, Scott and his companions became national heroes. The race between Scott and Amundsen became a subject of many books and films, and the discussion about reasons for Scott's failure still continues.

Roald Amundsen was a Norwegian polar explorer who is famous for leading the first successful expedition to the South Pole in 1910-1912. Amundsen was born in 1872 in Borge, Norway. His parents wanted him...more