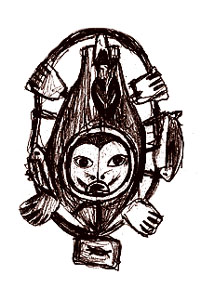 Sedna is the spirit of the sea according to the peoples of northern Canada and Greenland, named Inuit. Sedna resides at the bottom of the sea and has power over all animals. Her control of the sea, which the Inuit people depend on for their survival, gives Sedna an enormous power. Inuit people believe that success or failure in hunting depend on her unpredictable mood.

Sedna was originally a young girl who stubbornly refused to marry anyone until her father forced her to marry a dog as a punishment. However, when Sedna became pregnant and gave birth to her children, Sedna's father felt sorry for her and drowned the dog. Sedna's children attempted to avenge in the death of their father unsuccessfully. Without her husband, Sedna was unable to support her children and herself. Thus, she abandoned her children and returned to live with her parents.

One day, a bird disguised as a man sought Sedna in marriage. She accepted and went to live with him. But soon Sedna discovered that her new husband was not a man but a fulmar. When Sedna's father visited her, he convinced her to leave with him in his boat. But, the fulmar caught them, and created with his wings an enormous storm which threatened to overturn the boat where Sedna and her father were. Terrified, Sedna's father tried to throw the girl overboard to her husband, but she grasped the boat's side.

In fear, the father cut off Sedna's fingers at the joints until she slipped into the sea, reaching its bottom. There she resides as the great Sea spirit with the seals and other sea animals that were created from her fingers. She lives with her first husband, the dog, and her father who was swept out to sea in his grief. In the underworld, Sedna's father represents the tormentor of humans who transgress against the rules of life.

Astronomers have announced the discovery of a large new planetoid named Sedna. Mike Brown of the California Institute of Technology, Chad Trujillo of the Gemini Observatory in Hawaii, and David Rabinowitz...more