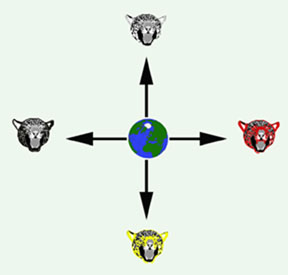 The Earth was conceived by the Maya as flat with four corners. Each corner represented a cardinal point, and was signaled by a different color: red for east, white for north, black for west, yellow for south, and green at the center.

At each corner, there was a jaguar of a different color that supported the sky. The four jaguars were called bacabs. Mayans believed the Universe was divided into layers, each layer containing only one sort of celestial body. Heaven was formed with thirteen layers, and each of them seemed to have had its own god.

The underworld was formed with nine layers with nine corresponding lords of the night. Mayans believed that the Sun and the Moon passed through the Earth when they disappeared below the horizon. On his night journey beneath the earth, the Sun was believed to have become the fearsome jaguar god of the underworld, Kinich Ahau.