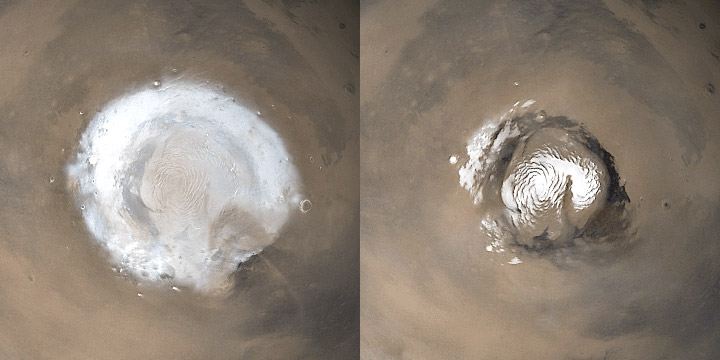 Mars has seasons, like Earth. Mars also has polar ice caps (also like Earth!); one at the North Pole and one at the South Pole. During the winter, when it is coldest, the polar ice cap grows as new ice forms. During the summer, some of the ice goes away, and the ice cap shrinks. This picture shows the polar ice cap at the North Pole of Mars at two different times. The picture on the left was taken during springtime, a little after the winter season. The ice cap grew very large during the winter. It is still pretty big in this picture, though warmer spring temperatures have begun to destroy some of the ice. The picture on the right is from summertime on Mars. There is still some ice, but a lot less than before! Some of the ice in the polar cap is made from water. Water ice stays frozen all year round on Mars. The ice in the picture on the right is water ice. In the winter, a different kind of ice forms when the temperatures get really cold. Carbon dioxide gas from the atmosphere freezes and forms dry ice. The dry ice only forms a thin layer (a meter or two deep), but it covers a very large area. That is why the polar ice cap is so much bigger in the picture on the left. In the summer the dry ice sublimates (turns back into a gas in the atmosphere) as the temperature gets warmer. The ice cap at the South Pole of Mars also shrinks and grows as the seasons change. Earth has ice that grows in the winter and shrinks in the summer, too. On Earth, sea ice around the poles grows in the winter and shrinks back in the summer.
Image courtesy of NASA/JPL/ Malin Space Science Systems.