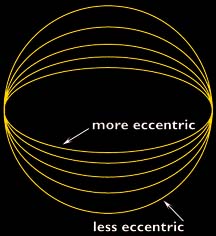 The orbit of Mars is very oval shaped. The orbit is much more oval shaped than the Earth's orbit. This means that the climate of Mars can change drastically between warm and cold.

Sometimes Earth gets pretty close to the planet Mars. Mars and Earth will be close to each other on October 30, 2005. Mars will look like a bright red star. Mars will be about 69 million km (43 million...more