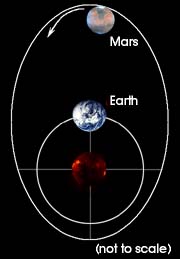 This drawing illustrates the large excursions in standard distance from the sun possible over the course of a Martian year. (The drawing slightly exaggerates the size scales).

If conditions are just right, there are times when Mars can experience a great deal more warming than normal.

Earth does not have the same potential for the climate extremes possible for Mars.

The planet Mars will be much closer to Earth than it normally is at 0319 Universal Time on October 30, 2005. Earth and Mars will pass within 69 million km (43 million miles) of each other, and Mars will...more